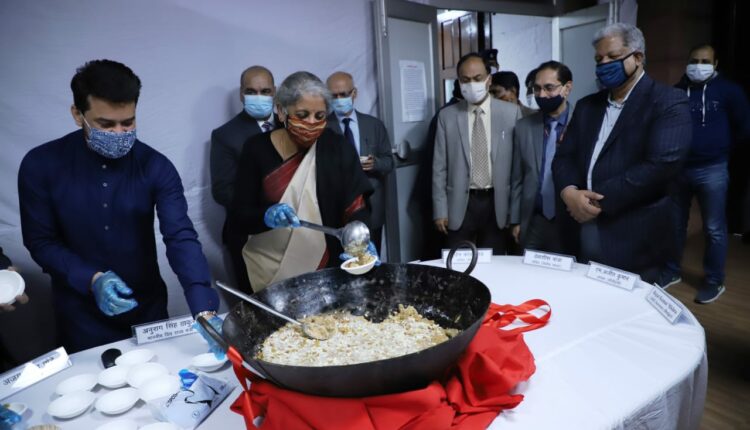 The traditional halwa program was organized by the Finance Ministry on Saturday today. With this, the final phase of paperless budget 2021 has started. Finance Minister Nirmala Sitharaman also participated in the event. This program marks the beginning of the process of publication of Union Budget documents. It is organized a few days before the budget is presented. Finance Minister Nirmala Sitharaman will present the Union Budget for the coming financial year on February 1.

In this ritual more than seventy years old, the Halwa is prepared every year in a huge cauldron and the entire staff is served in the North Block of the Ministry of Finance, about 10 days before the budget. After the Halwa program, a large number of officers and support staff directly involved in budget making and its printing process have to stay in the ministry away from their families till the presentation of the budget by the Finance Minister in Lok Sabha.

However, this time the budget will not be printed in view of the corona epidemic, i.e. this time the budget will be paperless. After this ceremony, the officials said that the employees who were involved in the process of budget formation will be kept in the basement of North Block until the budget is presented. “Those officers can leave the basement only after the Finance Minister presents the budget in Parliament,” said an official. This is done to avoid any leakage before the annual budget is presented. ”

The Budget documents will be available on the Mobile App after the completion of the Budget Speech by the Finance Minister in Parliament on 1st February 2021.