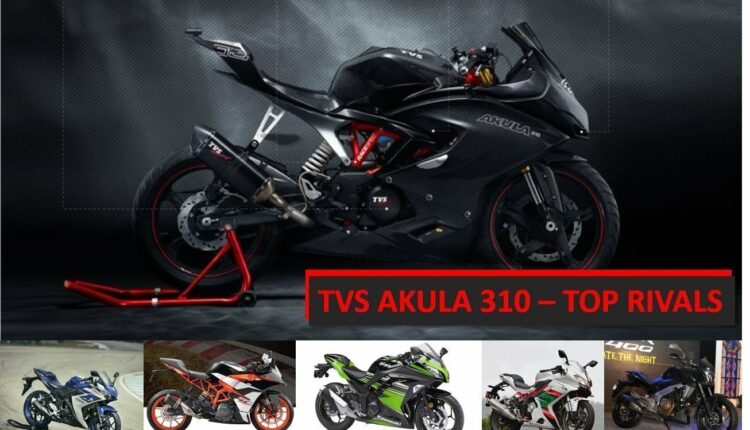 The days of conventionally designed motorcycles are gone. Modern-day motorcycles are highly engineered and powerful machines, which promise strong performance. Today’s world loves to move with speed and ride their own way, especially the young generation. The manufacturers of the two-wheelers around the world are working hard to fulfil the rising thirst of people to ride high-speed motorbikes. Every now and then, we see a better and more powerful launch, which is the result of healthy competition among the bike makers, who thrive to produce their best every time.

The home-grown two-wheeler manufacturer, TVS, is not far behind any other competitor. It has also entered the 300 cc segment with its most-anticipated product, the TVS Akula 310. The Akula is the first ever full-faired sports motorcycle to be produced by the manufacturer. The sales performance of the product will further pave way for more improved and powerful launches from the company in near future.

It is a fact that whenever any new product hits the market, it has to face many challenges. Among those, the major challenge is the competition with other manufacturer’s product, be it in the same segment or in the same price range. So, TVS Akula 310 will also have to face the rivals, such as the motorcycles that are from companies like Yamaha, KTM, Kawasaki and Benelli.

Here, we will discuss in detail all about the new TVS Akula 310 and its top competitors.

The Yamaha YZF-R3 is one of the strongest contenders in the segment, which is dominated by the KTM RC390 and the Ninja 300. It features a sharp design with a tough body and attractive aesthetics. It has been the strongest bid by the company in the segment since 2015.

Mechanically, the motorcycle is powerful and offers a 321 cc, liquid cooled, DOHC engine that produces a maximum power output of 42 bhp and a peak torque of 29.6 Nm. The engine comes paired with a 6-speed constant mesh gearbox, which does the transmission duties. Yamaha YZF-R3 manages a top speed of 170 kmph.

The 2017 KTM RC390 has received significant changes in the design to look aggressive than the previous generation model, while the engine mechanism remains the same. It has also added some new features for the convenience of the rider along with some additional safety measures.

Under the hood, the fully-faired sports bike from KTM offers a 373.2 cc motor, which churns out a maximum power output of 42 bhp at 9,000 revolutions per minute and a peak torque of 35 Nm at 7,000 revolutions per minute. The transmission work is done by a 6-speed manual gearbox. The performance of the engine is very powerful and the vehicle manages to attain a peak speed of 167 kmph.

The Kawasaki Ninja 300 is the facelifted version of the Ninja 250R but has received a fresh design. Hence, the new model looks no less than any new model on the block.

The Ninja 300 offers a strong performance and is among the table toppers in the segment. It features a 296 cc, liquid cooled, DOHC engine that delivers a maximum power output of 39 bhp against a peak torque of 28 Nm. The engine is paired to a 6-speed gearbox. It records a top speed of 180 kmph, while it can accelerate from zero to 100 kmph at 5.6 to 6.41 seconds.

The Benelli Tornado 302 is a fully-faired 300 cc motorcycle that holds a sturdy and powerful stature. The vehicle is nicely crafted and looks appealing from the outset and resembles its naked sibling, the TNT 300. The new product from Benelli feature some goodies like a trellis frame, inverted front forks and dual front disc brakes with ABS as standard.

The Bajaj Dominar 400 is among the best available sports motorcycle within the segment and is the flagship product from the home-grown motorcycle maker, Bajaj Auto. It is built on the platform of CS400 concept and features a muscular body with an aggressive stance. It falls into the category of the naked-type sports motorcycle with an upright stance. However, despite the difference in the segment, it is one of the strongest rivals of the Akila 310.

The Bajaj Dominar 400 features a 373.2 cc (same as the RC390), single cylinder engine which develops a maximum power output of 34.5 bhp at 8,000 revolutions per minute and a peak torque of 35 Nm at 6,500 revolutions per minute. The transmission duty of the vehicle is taken care by a 6-speed slippery clutch gearbox. The powerful motorcycle records a top speed of 148 kmph, while it can accelerate to a speed of 100 kmph in just 8.32 seconds from point zero.

The TVS Motor Company and BMW Motorrad have together designed this highly rated sports bike. It features a stylish design and has almost retained most of the elements from the concept model. The modern look of the bike appears trendy and is aggressive in the front-end, which makes it an absolute heartthrob.

Akula 310 is not only the first fully-faired sports bike from the manufacturer, but the manufacturer has worked hard to produce the best from its side. It features a strong engine mechanism comprising of a 310 cc, single cylinder, fuel-injected engine. The engine churns out a maximum power output of 34 bhp against a peak torque of 28N. It comes paired with a 6-speed manual gearbox. However, despite having a smaller engine compared to the Yamaha and the KTM, the motor is an absolute stunner, as has been the case with almost all the sporty motorcycles made by TVS, which are known for their high acceleration and engine refinement.

The large 310 cc engine of the TVS Akula claims to record a peak speed of 175kmph. But that is not it. It even claims to have a very high number on the acceleration area, with the zero to 100 kmph coming up in a mere 6.8 seconds.

Is it better than the competitors?

The new Akula 310 from TVS Motor Company is an exciting product with an aggressive styling, safety features and a big engine. It is among the top-speed sports bike in this segment and is a powerful bid from the manufacturer.

The segment of sports motorcycles, with 400cc engines, is currently topped by the KTM RC390 and the Ninja 300, which are the current favorites among the people. However, they are priced slightly on the higher side than the likes of the Dominar. However, with the pattern at which TVS motorcycles are priced, the Akula 310 is expected to be priced at par with the Dominar, which would make it the most affordable, fully faired sports motorcycle in the country to have a powerful heart.

how to root Asus ZenFone 4 Selfie and install TWRP Recovery